We have most parts in stock for all models. Upstokes, Chain Drives, Bull Gears, Motors, Brakes, Etc.  Just call us, or check out our Parts Storeto search for your part, or use the Special Requests Form, and we will get you a price quote on the parts you need.

How Old is My Baler? Click Here to See 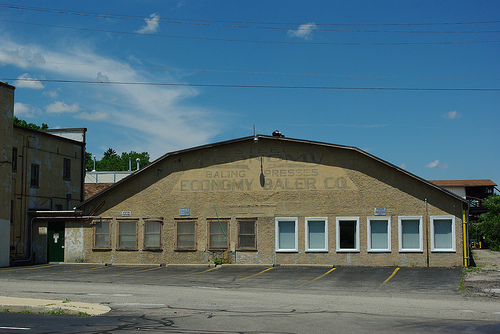 A fortune built on waste paper

In 1911, George Langford took out a second mortgage on his house in order to start Economy Baler. The company, headquartered on North Main Street, grew to be the largest business of its kind in the world. In a 1943 Ann Arbor News article, Langford claimed that its success was "a direct result of the old system of free enterprise which not only permitted but encouraged the plowing of profits back into the business."

Economy Baler's motto was "turning waste paper into profit." In the early years of this century, corrugated cardboard began to replace wooden crates for shipping. While wooden crates could be used again and again, cardboard was hard to get rid of. Merchants would let it pile up in their basements, where it was a serious fire hazard, before eventually paying someone to haul it away. While paper mills were eager to get more paper waste and were willing to pay for it, the empty boxes were so light and bulky it seldom was worth the trouble to handle and ship them. Langford's invention changed that.

Langford learned about balers, and about business practices, from his uncle, Wendall Moore, manager of the Ann Arbor Machine Company on Broadway. The company made agricultural machines, including hay presses (see "The Broadway Bridge Parks," August). Langford began working for the company while living with his uncle and aunt in their big house on Moore Street, having come to Ann Arbor to attend high school. He held a variety of jobs; the last one, before he left to go on his own, was traveling by horse and buggy to county fairs to show farmers the firm's products. On one of these trips Langford heard that someone had invented a paper compressor. But the crude wooden contraption left him unimpressed.

Believing he could make a better paper compressor, Langford tried to convince his uncle to add one to his product line. When Moore refused, Langford decided to do it himself, quitting his job in 1911 to devote himself to his new enterprise. His only asset at the time was his house, on Greenwood, so he secured a $5,000 second mortgage on it. He spent $100 to build a prototype of a hand-powered metal baler. Using a picture of this single machine, he spent the rest of the mortgage money on advertising, offering to sell the baler for $50, with a $10 deposit. Within a month he had 100 orders. On the strength of those, he went to the First National Bank and asked for a $5,000 loan. They gave him $500.

With $1,500--the bank loan plus the money from his customers' deposits--Langford bought supplies and rented, for $10 a month, a small shop in the alley behind his uncle's business. At first he made the balers himself in the shop during the day. Evenings he worked at home on bookkeeping details. When the business began to take off, he hired a mechanic, Albert Wenk, to help him build the balers. Wenk later became a partner, buying a 1/15 interest for $600. In 1943, reminiscing about those early years, Langford said, "It was a tough job for a while, meeting the payroll on Saturday nights and counting on checks coming in from purchasers in time Monday to keep the company bank account in balance."

By 1912, Langford was in good enough shape to build his own shop at 1254 North Main. Economy Baler's first building was a 35 by 70 foot shed, large enough for fifteen employees. By 1916, the company had expanded into two additional stucco buildings complete with machine shop, forge shop, assembly line, printing, woodworking machinery, and electrical shop. At the north end he built a tall shed for his electric crane. Langford's son, Bob, remembers that the sign on its roof--"World's Largest Baling Press Mfgr."--was so large that it served as a landmark for early pilots.

As his business prospered, Langford became well known in town. Almeda Koebler, who worked as a cook for the Langfords in the 1930's, when they lived on Woodside Road and summered at Winans Lake, remembers Langford as a large man, partly bald, very friendly and outgoing. He loved jokes so much that he would pay people 25 cents to tell him a new one. He was also a practical joker. Anecdotes handed down include one about a chair in his office that collapsed when someone sat in it and another about rubber hooks on the wall that confounded first-time visitors when they tried to hang their coats on them.

By 1925, Economy Baler was able to claim that Ann Arbor made more baling presses than any city in the world. Langford employed 100 men who worked fifty hours a week year-round; had branch offices and salespeople in practically every important city in the country; and was continually adding new presses to handle everything from tin cans to tobacco.

In 1937, Economy Baler built a new office building facing Main Street. Architect Douglas Loree designed a "modernistic" building with glass block windows across the front. Bob Langford, who worked in the purchasing department of the new building, remembers that the glass block let in light but got so cold in the winter that frost sometimes formed on the inside.

Economy Baler continued to thrive after World War II, developing several more special balers including a huge cotton press and a scrap-metal baler that could swallow a whole auto body. By then George Langford was ready to retire. Bob Langford might have taken over his father's business, but although he had worked there, he did not feel right about going in as manager over the heads of older, more experienced people. So in 1945, George Langford sold his controlling stock, taking care to find a buyer who would keep the facility in Ann Arbor. (Bob Langford started his own Ann Arbor business and later developed properties on Huron View Boulevard and Research Park Drive.) George Langford died in 1956.

Economy Baler closed in 1976, when the last owner, American Baler Company, merged the Ann Arbor operation with their plant in Bellevue, Ohio. The company buildings were owned by Lansky's junkyard until 1978, when they were purchased by the Michigan Automotive Research Corporation. MARCO, which does contract testing of engines, transmissions, and vehicles, has adapted the buildings to its own uses. According to MARCO's Mike Boerma, the only indoor remnants of the buildings' original function are the welding outlets on the walls. The exteriors have been modernized, except for the structure closest to the river. It is still stucco, as it was in 1916, and the name painted on the wall is still discernible: "Economy Baler Company."