Do you need professional duct repair? 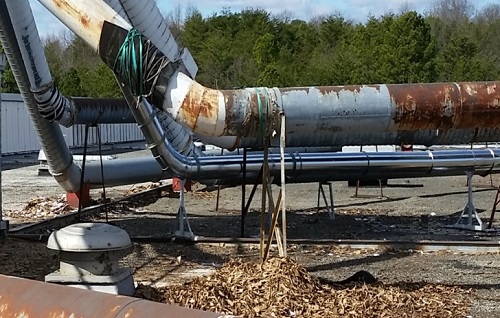 Do you need professional duct repair?

The joy of a well-designed air system is, once up and running, it should always work.  A switch is flipped and material is picked up from one end of a facility and deposited at the other end.  Except for occasionally greasing the fan bearings, there isn’t much maintenance on a duct line.  (Mechanical separators, balers, compactors, feeders, dust collectors etc.… is a topic for another day)

Alas even the best ductwork cannot withstand the ravages of time and use.  It is not uncommon for ductwork to last 40 years or more, but it should be periodically inspected.  Ductwork on the roof gets exposed to rain, wind, snow, ice, and hot sun.   Ductwork under the roof gets hit by scissor lifts and forklifts. Support brackets may vibrate loose or get bumped.  Pipes are subject to damage from foreign objects - scrap wood, tools, and trash – that get sucked through the line and dent or puncture all parts of the pipe as they go.  The occasional clog will take its toll on ductwork as employees rush to disconnect, clear, and restart the system. (Hint: Clamp together ductwork works wonders)

Even after all that abuse, most ductwork systems continue to operate…but is it performing optimally, or quietly sucking up your profits?  Maybe there was a jam when a Christmas party got a bit out of control.  Santa’s outfit - boots and all - got sucked into the system (true story)!  The next decade brought an occasional jam at product changes.  Eventually issues started popping up every other month.

Stopping a multi-million dollar 24/7 corrugated or printing operation to locate and clear a clog in a line can be a tremendous source of frustration.  When the system is working again, we tend to move to other priorities and not pay attention to the ductwork again until another catastrophe strikes.  When small issues of infrequent clogging are dealt with, and they gradually become more frequent, downtime becomes the norm.  Now the expense is more serious.

Look at, identify, and analyze the costs of aging ductwork.